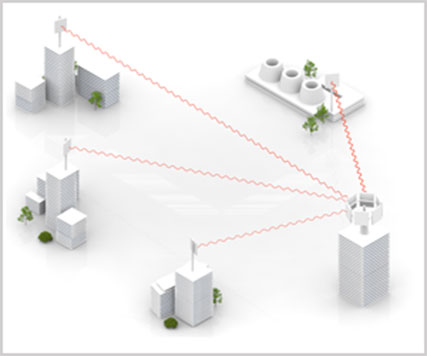 Airpath offers several choices for PTP solutions in the unlicensed RF spectrum . Note that Airpath's PMP products are also listed as PTP solutions since PMP products can also serve PTP applications. Refer to the products page to find out more about Airpath's fine assortment of PTP wireless data networking products or continue to explore the Technology topics to help you understand which specific products are best suited for you.

Why PTP networks are needed and how it compares works with PMP networks.

Wireless PTP data links typically do not require much in the way of network services. As a result, PTP devices typically operate as simple (Ethernet) bridges and leave services such as routing and traffic policing to the networks they are connecting. In a sense, a PTP wireless link becomes an invisible "cable" joining two data network devices. Without wireless technology, distances of over 100 meters typically must be served by wide area network (WAN) technologies such as T1/E1 and fiber. However, wireless data networking allows for local area network (LAN) technologies such as 10-BaseT to be used. These technologies are not only less expensive but they are more readily available as well … just about every computer now has an Ethernet network interface (NIC) port. This means that computers can be directly connected to each other using wireless PTP technology even if they are separated by many miles/kilometers.